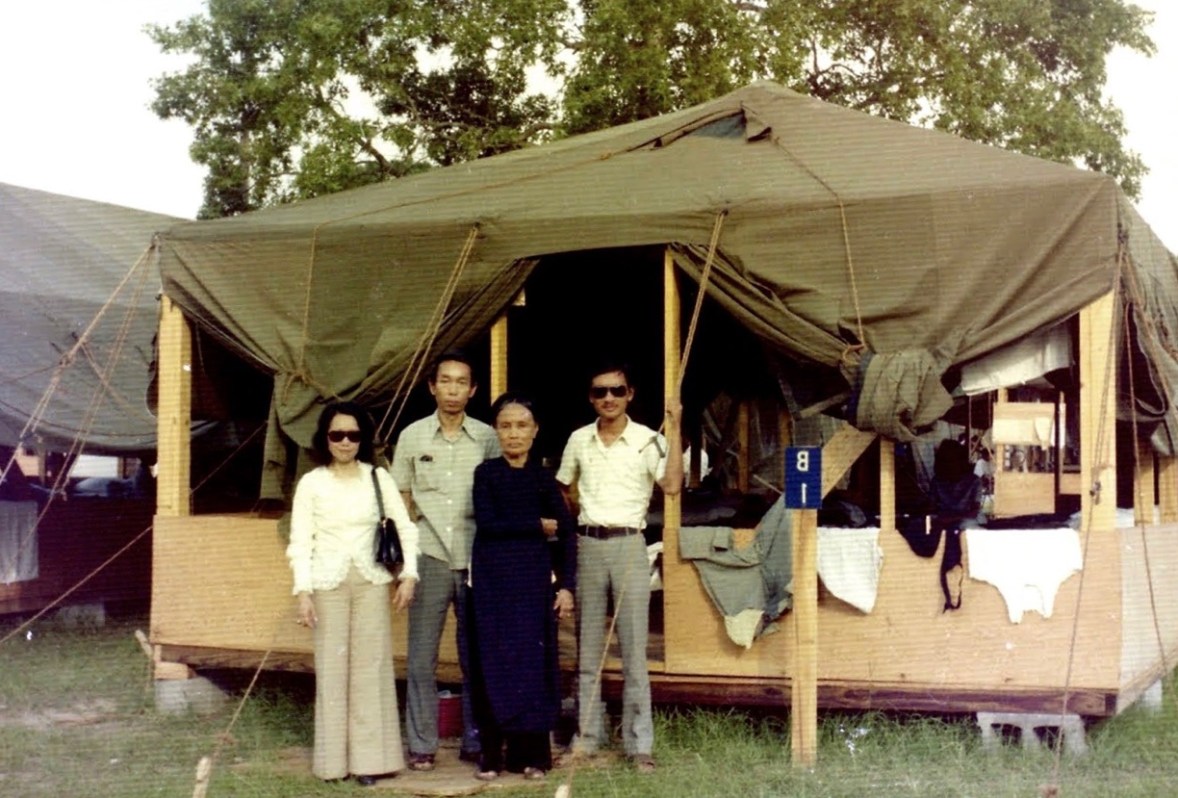 I wrote a piece about my parents’ escape from war-ravaged Vietnam and their arrival in the United States (I didn’t choose this title and it’s a bit literal for my tastes):
My refugee parents and our American lives

My father’s bottle of cognac slipped out of his grip and plunged into the Saigon River in April 1975. Besides a hastily-packed bag of clothing it was the only thing he carried as he rushed aboard a boat fleeing Vietnam in the final days of one of the most senseless wars in American history. I exist because of that violence, and the American people’s willingness to make amends for it.

My father credits martial law with helping his family escape Vietnam. With everyone confined to their homes, the whole family was together when my great uncle called from Khánh Hội Port to inform them that people were jumping aboard any ships they could find to leave the country. My father (as eldest son) finalized the decision to risk being shot by ignoring the order to stay indoors. They didn’t know until they left the house that soldiers were too distracted — trying to stay alive as Saigon was being shelled — to enforce martial law.

It was at the port, on a gangway leading to a boat, that my father lost his bottle of cognac as the flood of people rushing aboard knocked it into the water. The boat was bound for Taiwan but limited fuel diverted them to the Philippines, where the U.S. Navy picked up the refugees to take them to Guam and, ultimately, Eglin Air Force Base in Florida’s Panhandle.

My mother’s journey was less chaotic, as her cousin owned a boat upon which she and her family had arranged passage. That boat and others got picked up by U.S. Navy ships parked in the East Sea (the South China Sea to some) waiting to intercept fleeing refugees. My mom and her family ended up at Fort Indiantown Gap in Pennsylvania, a half hour’s drive from Harrisburg.

Camp Pendleton in California and Fort Chaffee in Arkansas joined Eglin Air Force Base and Fort Indiantown Gap in resettling the roughly 125,000 Vietnamese, Cambodian, and Laotian refugees that made up the first wave of southeast Asian immigration in the spring of 1975.

Refugees couldn’t leave a camp until a sponsor volunteered to help them. Sponsors were responsible for finding lodging and work for refugees and their families. Sponsors would also help with transportation, clothing, and otherwise acclimating to a new culture. This could include how to shop for groceries, getting a driver’s license, or how to get a mortgage. Sponsors could be individuals or non-profit organizations — both religious and nonreligious.

Most of my father’s family actually had a Canadian cousin sponsor their citizenship up north, but in pursuit of a job with an American colleague who had worked in Vietnam, my dad ended up in Pittsburgh. My mother’s family found sponsors in Richmond, Virginia but my mom eventually received a scholarship to attend Waynesburg College (now University) an hour outside Pittsburgh.

It was in that southwestern corner of Pennsylvania that my parents met at a Lunar New Year celebration with Vietnamese refugees in the area. They were married in August 1979 and their first son (that’s me!) was born nine months later. My brother Vu and sister Quynh followed in 1982 and 1985.

My dad was one of a handful of Vietnamese students who had earned scholarships to study in Australia, and thus had conversational English skills by the time he arrived in the United States. That and an electrical engineering degree secured him good work with RCA and then the government. My mother mostly stayed home to take care of the kids, but eventually worked in banking and a university bursar’s office once we got older.

We lived many of the Asian stereotypes: we ate a lot of rice at home, I grew up using chopsticks, and dedication to school was paramount. Just about the only vacations we could afford were trips to visit family in Montreal or Richmond, but we lived a comfortable life in suburban New Jersey. A fairly robust Vietnamese community in nearby Philadelphia, largely centered around the Buddhist temple, kept my parents connected with a familiar culture.

My parents were astonished when I told them I was running for office. I’m not particularly outgoing and I hadn’t expressed interest in participating in politics before. When I won, relatives asked my parents whether I lived in a predominantly Asian town. I don’t want to project clichés about having achieved the American Dream onto them, but my parents are proud of having raised someone who was able to both achieve traditional success of a good career in a STEM field while engaging well enough to win the trust of (most of) my community.

All I’ve known is a solidly American middle-class — and thus quite privileged — life. I was as angsty and ungrateful in my teenage years as any of my peers and not once did my parents call to my attention the suffering and sacrifices required to provide me the privilege of whining about, say, getting access to the car. I’m grateful to have been shielded enough to have lived a fairly prototypical American life (generously seasoned with Vietnamese culture at home), but even more grateful to have learned details of my parents’ escape over the past several years.

I can’t escape the irony that a war that I certainly would have opposed were I an American at the time directly lead to my existence. But life springing out of death and destruction isn’t a unique story. If we can bring any light to the numerous humanitarian crises around the world by taking in a tiny percentage of the 21 million people displaced from their homes, I implore you to support it. If you’re unsure whether immigrants can assimilate and contribute meaningfully, let my parents’ story be just one of millions across two and a half centuries of American history to show otherwise.