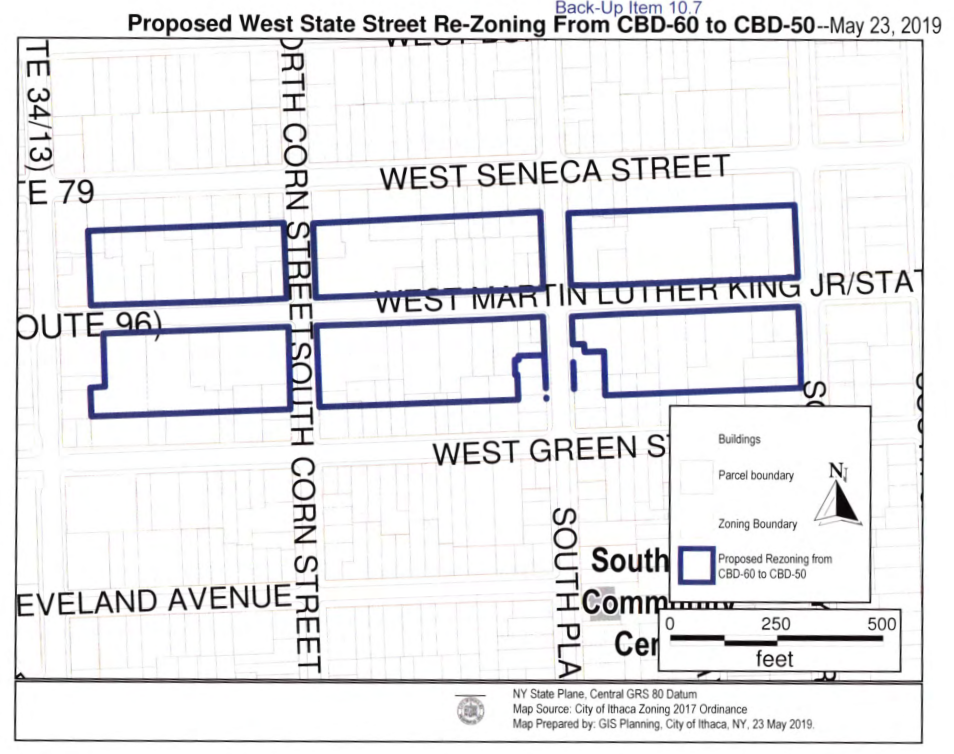 On the July 3, 2019 Common Council agenda, there’s an item (10.7) that came out of the Planning and Economic Development Committee to downzone the 300, 400, and 500 blocks of West MLK/State Street by reducing the maximum height from 6 stories to 5 stories and limiting the first 15 feet of a building to 3 stories.

I can support sections 1 and 2: minimum floor heights and adjusting maximum heights to account for it. I think the concept of a stepback that provides access to additional light and a feeling of greater intimacy to a building is reasonable too. It’s the rest I’m concerned about:

Given those misgivings, I will move a few changes to 10.7C on Wednesday:

Those last two points are more form-based approaches to zoning inspired a bit by the Collegetown Area Form Districts. The specific numbers would obviously need to be vetted and can be adjusted. The maximum footprint would force Visum’s project to be 3 separate buildings.

I’m an adamant anti-sprawler, and allowing density in the CBD is the bare minimum to achieve that. The W MLK corridor is perfect for it. Keep in the mind the entire CIITAP density district is by my calculation only 0.29 square miles or 5.4% of all the land in the city’s boundaries. Add the tenth of a square mile that the Collegetown Area Form Districts cover and we’re still only at 7.2% of the city’s land. Change in this city is very tightly contained (which I don’t necessarily agree with, but hey, baby steps).

That doesn’t mean I’m immune to concerns about losing some of the charming buildings in that corridor. What’s charming about them, though? Like the older buildings on the Commons they have relatively narrow facades (the Cigar Factory might be the widest at around 65’), human-scale 4 or fewer story heights at the street, basic rectangular shapes, and moderate footprints. I think the form-based part of my suggestion can address that.

Without my proposed changes or something substantively similar to them, I will be voting against downzoning this vital and active artery in the city’s urban core. We need more housing and building up is more sustainable than building out. I also want to shatter assumptions many people have that a 3-story building is inherently more attractive than a 6+ story building. I just don’t agree and beyond aesthetics I think it’s a harmful stereotype when our housing needs are so great.

Zoning is an arcane but vitally important issue that I’ll be expanding upon with strong and not always popular opinions in the coming months.